For the last term, Mr Gallagher's Junior Infant class, Ms O Brien's Senior Infant Class, Ms Mannion's 1st Class and Mr Goldrick's 2nd class were in charge of the hall noticeboards. They all have created fantastic displays and shows the artistic talent we have in our school.


Junior Infants
Mr Gallagher's class created a beautiful display entitled "April Showers brings May flowers". The children used crayon/colouring pencils to draw Spring flowers and using a straw they blew watered down paint across the flowers to give a rain-like effect for the April showers. It looks fantastic. 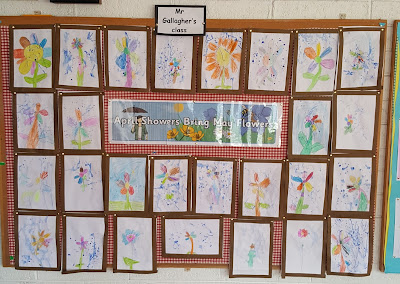 Senior Infants
Ms O Brien's class drew dragons based on their class mascot-a glass dragon called DJ. The children used their imagination to create scenes that DJ might get into. They are all very creative. 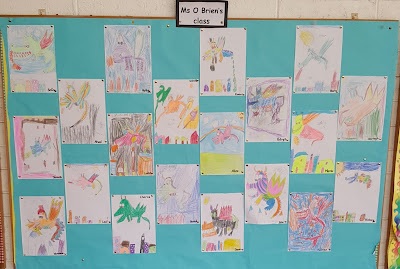 First Class
Ms Mannion's First class have been discussing Monet's "Water Lilies" pieces in class so inspired by this, they created their own masterpieces. They used a range of water colours such as various shades of greens and blues to imitate the famous paintings. Well done everyone! 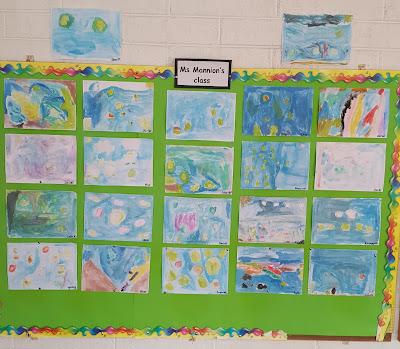 Second Class
In Second Class, the boys and girls in Room 2 have been looking at more contemporary artists. Mr Goldrick's class have been studying the works of Banksy, the infamous graffiti street artist and so made their own graffiti in school. Thankfully not on the school walls but on their hall display. Each child came up with an image on a brick effect piece of paper and when all the "bricks" came together, the result is very impressive..our very own Banksy wall...or is it??! 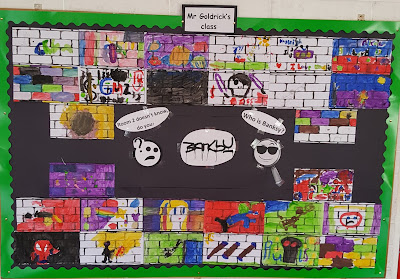